AN EVENING WITH RENEE ELISE GOLDSBERRY 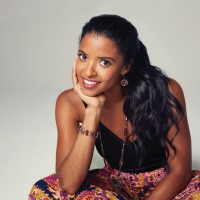 Join acclaimed Broadway actress and singer Renée Elise Goldsberry at the Virginia Theatre for an intimate evening of jazz, R&B, soul and Broadway tunes, and much more!

Goldsberry received both the Tony and Grammy Awards for her performances in the musical phenomenon Hamilton.

All tickets from the originally-scheduled show will be honored by the Virginia Theatre at the new date. This includes tickets currently on hold at WILL CALL, print-at-home tickets, and also original printed tickets.

Any patron unable to attend the new rescheduled date may request a full refund by emailing virginia@champaignparks.org or by calling 217/356-9063. PLEASE NOTE: The deadline for all refund requests for An Evening with Renee Elise Goldsberry is September 10, 2021, at 5:30pm.

Renee Elise Goldsberry has received the Tony Award, Grammy Award, Drama Desk Award, and Lucille Lortel Award for her performances both off and on Broadway in the musical phenomenon Hamilton, in which she originated the role of Angelica Schuyler.

Since winning the Tony Award, Ms. Goldsberry has appeared in Baz Luhrmann’s ‘The Get Down’ for Netflix and shot the title role for HBO’s ‘The Immortal Life of Henrietta Lacks’ opposite Oprah Winfrey. She is currently starring in the Netflix series ‘Altered Carbon’.

Prior to Hamilton, Renee’s appearances on stage include her Outer Critics Circle Award nominated performance opposite Frances McDormand in the play Good People, as well as the original stage version of The Color Purple. She made her Broadway debut in The Lion King and was the last “Mimi” in Rent. Her off-Broadway appearances have included several Shakespeare productions for the Public Theater’s New York Shakespeare Festival, where Hamilton originated. Her television appearances include her recurring roles on ‘The Good Wife’, ‘Law & Order: SVU’ and ‘The Following’.

On film, she appeared most recently in ‘Sisters’ with Tina Fey and Amy Poehler, and in ‘Every Secret Thing’ with Diane Lane and Elizabeth Banks.


NOTICE: FACE MASKS ARE REQUIRED AT THE VIRGINIA THEATRE
On Thursday, August 26, 2021, Illinois Governor Pritzker announced an Executive Order that all individuals age 2 and up who are medically able are required to wear a face mask while indoors in public settings, regardless of vaccination status.