THE PIRATES OF PENZANCE 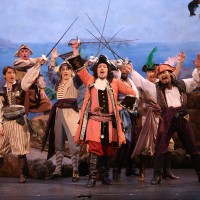 The New York Gilbert & Sullivan Players production of The Pirates of Penzance, originally scheduled for Wednesday, March 9, 2022, will be presented on Thursday, March 23, 2023, at 7:30 PM.

Tickets purchased for the postponed March 9, 2022, performance will be accepted at the March 23, 2023 performance.

Patrons with tickets to the original date who are unable to attend the new date may request a full refund no later than Friday, March 11, 2022.

Doing one’s duty may be honorable, but....

The Gilbert and Sullivan classic brought to life! Frederic is the erstwhile apprentice to a band of sentimental pirates who, now that he’s 21 years old, has decided to devote himself to ending piracy – until he discovers (in a classic “Gilbertian” twist) that his 21st birthday won’t occur until the distant date of 1940, because he was born in a leap year...on Feb. 29.

Kissing romantic Mabel farewell, he must return to his former colleagues…while the pirates seek revenge for having been played.

Now in its forty-sixth year of operation, New York Gilbert & Sullivan Players (NYGASP) is America’s preeminent professional Gilbert & Sullivan repertory ensemble. Under the dynamic leadership of Artistic Director Albert Bergeret, who has been hailed as “the leading custodian of the G&S classics” by New York Magazine, NYGASP has created its own very special niche in live theatre.

Since its founding in 1974, NYGASP has presented over 2000 performances of the Gilbert & Sullivan masterpieces throughout the United States, Canada, and the U.K., captivating audiences of all ages.