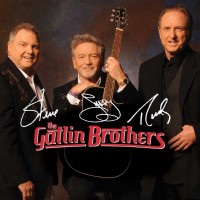 The tour is currently working with the event presenter to select the new concert date.

Tickets purchased for March 12th will be honored at the new date. Please watch this page for updates or sign up for the Virginia eNewsletter here: https://thevirginia.org/enews/

The Brothers have accumulated 7 #1 Singles, 32 Top 40 Records, 22 Studio Albums and 5 BMI "Million-Air" Awards, with Larry ranking 4th as a solo songwriter with the most self-penned top 40 Billboard Hits. His massive song catalog has been recorded by the Who's Who of entertainers, including Elvis Presley, Barbara Streisand, Johnny Cash, Roy Orbison, Glen Campbell, Kris Kristofferson, Sir Tom Jones, Dottie West, Charlie Rich, Johnny Mathis and dozens of others, securing his legacy as one of BMI's top solo songwriters of all time.

In 1976, the Gatlin Brothers were on the fast track, thanks to the chart-topping success of the Grammy Award-winning single “Broken Lady”. The hits continued throughout the decade with their signature song “All the Gold In California” followed by “Houston (Means I’m One Step Closer To You)". The next decade brought number one hits with “I Don’t Wanna Cry”, “I Just Wish You Were Someone To Love,” “Statues Without Hearts,” “Love Is Just A Game”, and “Night Time Magic.”

They have performed at the White House, the President Reagan Library, Ford’s Theater, Camp David, President Bush’s 80th Birthday Party, The Lincoln Theater, with the New York Pops Orchestra (at Carnegie Hall), Houston Symphony, Madison Square Garden Venetian Room, West Point and Wembley Music Festival. In addition, they have graced the stage with legendary entertainers from all over the world, like Brad Paisley, Rascal Flatts, Vince Gill, the Oak Ridge Boys, the Gaither Vocal Band, the Isaacs and many others.


Please note: Dynasty Entertainment, LLC, will be donating $1 from the sale of each ticket to this show to the Developmental Services Center of Champaign, Illinois.