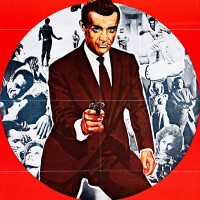 1 ticket is good for admission to both films, which will screen back-to-back at each showtime, with a brief intermission between titles.

In the film that launched the James Bond saga, Agent 007 (Sean Connery) battles mysterious Dr. No, a scientific genius bent on destroying the U.S. space program. As the countdown to disaster begins, Bond must go to Jamaica, where he encounters beautiful Honey Ryder (Ursula Andress), to confront a megalomaniacal villain in his massive island headquarters.

The powerful tycoon Auric Goldfinger (Gert Fröbe) has initiated Operation Grand Slam, a cataclysmic scheme to raid Fort Knox and obliterate the world economy. To save the world once again, James Bond (Sean Connery), armed with his specially equipped Aston Martin, must stop the plan by overcoming several outrageous adversaries.

The News-Gazette Film Series is your ticket to Hollywood’s golden age! Add house organist David Schroeder performing on the Virginia’s historic Hope Jones II Wurlitzer pipe organ before many shows, and you have an evening of entertainment fit for the whole family.

PLEASE NOTE: Due to the length of this double-feature presentation, the News-Gazette film critic Richard Leskosky will NOT be hosting a post-show talk after these films.