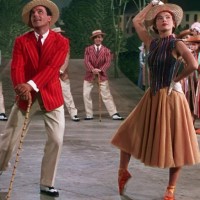 Gene Kelly is an artist trying to succeed in Paris in this beloved musical comedy featuring tunes by the Gershwins and beautiful dance sequences.

An American in Paris won 6 Academy Awards (including Best Picture) as well as earning other industry honors. The film was selected for preservation by the United States Library of Congress in the National Film Registry for being "culturally, historically, or aesthetically significant" and is ranked number nine among AFI's Greatest Movie Musicals.

The News-Gazette Film Series is your ticket to Hollywood’s golden age! Add house organist David Schroeder performing on the Virginia’s historic Hope Jones II Wurlitzer pipe organ before many shows, and you have an evening of entertainment fit for the whole family.

News-Gazette film critic Richard Leskosky will be back this season following many 7pm News-Gazette screenings for a post-show talk about each film — in the Virginia lobby.