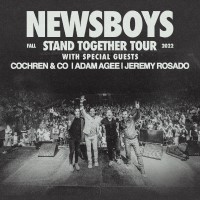 NEWSBOYS: Stand Together Tour
Concertgoers will get to experience the unparalleled high-energy show NEWSBOYS offer every night they take the stage, and get to hear many of their biggest hits along with newer songs from their latest album, Stand, such as the title track and the album’s debut radio single, “Magnetic.”

The group has just announced their 2022 “Stand Together Tour” with special guests Cochren & Co., Adam Agee, and Jeremy Rosado. Set to kick off October 6th in Champaign, IL, the tour will also make stops in Missouri, Florida, Oklahoma, Georgia, Tennessee, and Texas throughout the fall.

With signature songs like “We Believe,” “Born Again” and “God’s Not Dead” – which birthed a film franchise of the same name – Newsboys have continued to collect career-defining accolades. For over three decades, the band has toured extensively throughout the world to present their unparalleled high-energy shows, from their formation in Australia to their current residence in the United States, and everywhere in between.