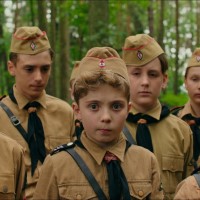 Presented by Illinois Public Media, this exciting series brings the very best of recent art films and documentaries to the Virginia Theatre.

In this sharp satire, a young member of the Hitler Youth discovers his mother (Scarlett Johansson) is hiding a Jewish girl in their home. Aided only by his imaginary friend, Adolf Hitler (Taika Waititi), Jojo must confront his blind nationalism as World War II continues to rage on.

Jojo Rabbit and its cast and crew won 14 film awards. Including the Academy Award for Best Adapted Screenplay. And, was chosen by the National Board of Review and the American Film Institute as one of the ten best films of 2019.

The movies that Mr. Hess selects—a mix of award-winners, Ebertfest favorites, and recent classics—are presented one Wednesday each month on the Virginia’s 52-foot wide movie screen, with state-of-the-art surround sound.

Each film will be followed by a post-show discussion and in some cases an on-stage talk by directors, producers, and other special guests. Presented by Illinois Public Media, home of WILL-TV, WILL-AM, and WILL-FM.