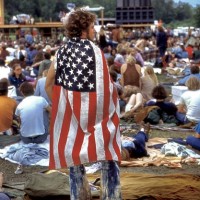 Vocalists Atrain, Kayla Brown, Ryan Byfield, AndrewDuncanson, RyanGroff, and DawnaNelson will perform with a full band on Park Avenue - in front of the theatre - before the screening.

The program includes a free outdoor concert from 5:00 to 7:00 P.M. produced by Anthony Gravino, High Cross Sound, along with a ticketed feature movie presentation of the documentary Incident at Kickapoo Creek inside the Virginia starting at 7:00 P.M.

A Q&A with filmmaker RC Raycraft will follow the screening, and an exhibit of period posters, articles, festival photographs, and other memorabilia will be displayed in the theatre’s eastern lobby.

Sponsored by The News-Gazette and Classic Hits 1079 WKIO.

Producer/Director RC Raycraft’s remarkable film documents a now-infamous Woodstock-inspired music event—the Incident at Kickapoo Creek Rock Festival—that a central Illinois farmer produced on his McClean County property over Memorial Day Weekend, 1970. The festival drew as many as 60,000 fans to the small town of Heyworth, Illinois, and was booked by then-University of Illinois student and Danville native Irving Azoff, who later became Chairman and CEO of Ticketmaster Entertainment and Executive Chairman of Live Nation Entertainment, among other endeavors.

The Incident at Kickapoo Creek Rock Festival featured some of the biggest musical acts of the era, including REO Speedwagon, BB King, Dan Fogelberg, Canned Heat, Ted Nugent, Country Joe & The Fish, Paul Butterfield Blues Band, Michael McDonald, and many more. And while concert footage was limited, Raycraft’s compelling documentary captures rare glimpses of the performances along with extensive shots of that weekend’s events and their impacts on the community.

Raycraft’s documentary also reveals some surprisingly dramatic twists and turns that took place well beyond the confines of the stage, including: a court injunction issued by a local State’s Attorney intent on stopping the event, an arrest warrant issued for the event’s producer, a court-ordered attempt at seizing the profits, and the subsequent disappearance of both the producer and the profits.

In 2020, Mr. Raycraft recut his film with 15 minutes of additional festival footage and new photographs. It is this special 50th Anniversary release of Incident at Kickapoo Creek that will receive its national premiere screening at the Virginia Theatre on September 17th.

Raycraft’s short film, A Casual Conversation with the King, featuring an interview with blues legend BB King, will precede the feature film.

Immediately after the screening, RC Raycraft will be on stage at the Virginia to discuss this legendary music festival, the story around it, and the making of the movie. Mr. Raycraft will also take questions from the audience and will be joined on stage by moderators LA Fredrickson and Dave Leake, co-hosts of the “Home Grown KIO” program on Classic Hits 1079 WKIO.

Please note: Incident at Kickapoo Creek is Not Rated. The film contains adult situations and nudity, and attendees must be 18 years of age or older or be accompanied by a parent or legal guardian. For more on the film, visit http://www.kickapoocreekmovie.com/.


Filmmaker RC Raycraft describes himself as a pop culture archeologist and is a director, editor, video archivist, author, and producer. The documentary Incident At Kickapoo Creek was his first feature-length motion picture.

Throughout the performance, the band will be joined by six of Champaign-Urbana’s premier vocalists: Atrain, Kayla Brown, Ryan Byfield, Andrew Duncanson, Ryan Groff, and Dawna Nelson.

Each singer will be performing songs from the artists who played at Incident at Kickapoo Creek Rock Festival, offering a variety of unique interpretations of the legendary music of well-known recording artists of the 1960s and 70s.

Food trucks will also be located outside the Virginia that evening for the enjoyment of guests along with other activities. 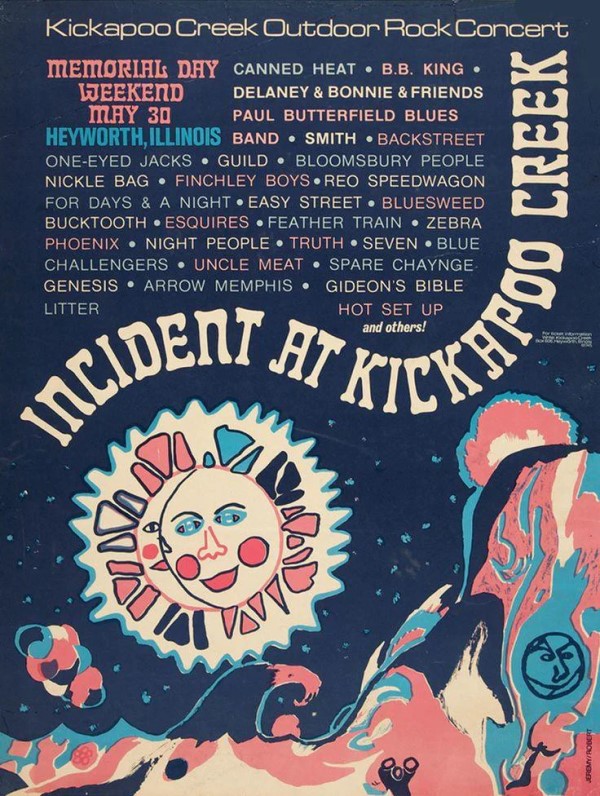