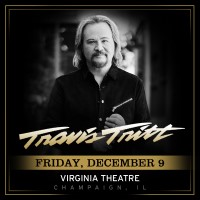 This show, which will include Tritt’s band, will give attendees an opportunity to hear some of the performer’s biggest hits, including “T-R-O-U-B-L-E,” “It’s A Great Day to Be Alive” and “Best of Intentions.”

Plan to sing along with Tritt’s vast catalog of crowd favorites like “Modern Day Bonnie and Clyde” and “Here’s a Quarter”—songs that have created a devoted fan base that continues to sell-out shows across the globe. Tritt will also perform favorites off his new album, Set In Stone, that was just released this year. Bringing his award-winning songs to life, the Grand Ole Opry member will leave the audience with a truly memorable experience.

Music has carried Travis Tritt on a lot of amazing adventures. From helping reunite the legendary Eagles to being mentored by such icons as Waylon Jennings, Kenny Rogers, and Charlie Daniels to becoming a member of the Grand Ole Opry, music has opened many doors that the talented Georgia native has boldly walked through and left his own indelible mark. And the adventure is far from over. With the release of Set in Stone, Tritt embarks on the next chapter of his stellar career armed with the distinctive voice, insightful songwriting, and outlaw edge that have served him well for more than three decades.


FACE MASKS OPTIONAL
In accordance with guidance from Governor JB Pritzker and the Illinois Department of Public Health, the wearing of face masks is considered optional in Champaign Park District facilities, including the Virginia Theatre.